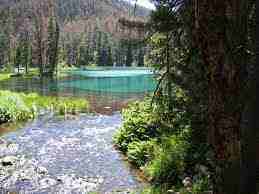 The Bridger-Teton National Forest lies in the western part of Wyoming, United States. The forest comprises 3.4 million acres (14,000 square kilometers), which makes it the third-largest National Forest outside Alaska. The forest extends across Yellowstone National Park, along the eastern border to Grand Teton National Park. From there, it travels along the west slope of the Continental Divide to the southern edge of the Wind River Range. The forest extends to the south to encompass portions of the Salt River Range and Wyoming Range mountains close to the Idaho border.

The forest extends across Yellowstone and Grand Teton national parks in the north, all the way south, through the western portion of the Wind River Range on the southwest edge of the Continental Divide. On the other side, it encompasses areas of the Absaroka, Wyoming, and Gros Ventre mountain ranges.

Bridger-Teton National Forest is the third-largest national forest in the US outside of Alaska. It’s a vast large area with diverse ecosystems and extensive recreation. There are 37 campsites developed and 34 designated trailheads within National Forest.

Hiking, mountain biking, horseback riding, and off-road driving are among the most well-known activities in the Bridger-Teton National Forest during the summer. The streams and rivers in the wilderness region, including three rivers, the Snake, Green, and Gros Ventre rivers, offer endless fishing opportunities: boating, fishing, and whitewater rafting.

The fall season is when hunting becomes a significant draw for tourists to the region. In the winter, three ski resorts with permits provide downhill skiing and numerous opportunities to go backcountry skiing or snowmobiling.

There are more than 1,000 miles (1,600 kilometers) of roads in the Bridger-Teton National Forest, offering beautiful drives and easy access to many parts of the woods. However, there are no roads in the Bridger, Teton, and Gros Ventre wilderness areas which are part of the national forest and are all huge areas that are not accessible to vehicles.

Lodgepole pines, Engelmann Spruce, Douglas subalpine fir aspen, and whitebark pine are the most common tree species. Sagebrush, grasses, and willows are common in lower elevations, whereas alpine meadows are typical over the timberline. Endangered and threatened species within the forest boundaries include the gray wolf, grizzly bear, black-footed ferret, and peregrine falcon. Most mammals that lived in the area before European settlement are still present in this area. Elk, mule deer, moose, bighorn sheep, bison pronghorn, marmot, coyote, and cougar are some mammals found in the forests. The four subspecies of cutthroat trout are also present, including the Snake River cutthroat trout. Three hundred and five bird species have been seen, including bald eagles, trumpeter Swans, sandhill Cranes, Clark’s nutcrackers, and hawks.

More than 2,000 miles (3,200 kilometers) of trails for hiking are within the forest. They provide access to wilderness areas and interconnecting trails within Yellowstone National Park. Numerous campsites accessible by vehicle offer campsites for tents and picnic tables and space in certain circumstances to accommodate recreational vehicles. The nighttime temperatures can drop below freezing at any season, and mosquitoes during the later spring or early summer months are not uncommon. Summertime high temperatures range from 70-79 degrees (21 to 26 degrees Celsius), and wintertime temperatures can fall below 50 degrees (-46 degree Celsius).

District offices of the Ranger have offices at Pinedale, Kemmerer, Big Piney, Moran, Afton, and Jackson. The headquarters of the forest is in Jackson. In ascending order of land area, the forest covers Sublette, Teton, Lincoln, Park, and Fremont counties.