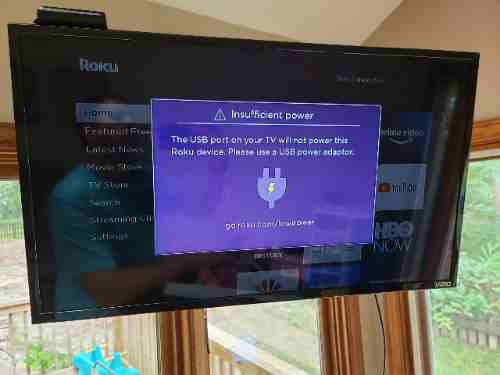 Roku low power error typically is experienced when you attempt to charge your Roku device using the USB port on your TV. When your TV fails to supply enough electricity to your Roku device, it will flash this error or shows a red light. In this instance, the TV cannot provide sufficient electricity to your Roku and consequently displays errors. According to the user, they’re seeing the error message, “Insufficient Power: The present HDMI Port of your Television cannot provide power to this Roku device. Use the supplied Roku USB power source”. Furthermore, this error may appear in a variety of ways.

If we talk about the most frequent indications, it displays the “low battery” or “insufficient power” error message on your screen. Then the Roku device flashes a red light. The device prevents viewers from watching their favourite films or shows.

So, in this article, we’ve provided the solutions that worked for various users to overcome the issue. However, before we start with the answer, it’s crucial to identify the most common causes of the problem.

The power consumption of Roku makes use of?

When utilized in regular course events, Roku streaming players and sticks generally only consume very little power when they are powered.

For instance, if you stream 4K HDR content on the Roku Ultra, your device consumes about 4.5 Watts. For example, the Roku Streaming Stick would consume about 3 watts if streamed.

Roku devices can be reduced in energy consumption by around 2 watts when not in use (since Roku devices cannot be shut off, energy is used every time they are connected to the wall socket).

If you’re having the Roku low power issue, The Roku will likely be hooked up via the USB port at the rear of your TV set. When the TV is turned off, the Roku will be turned off and will not draw any power source.

What does Insufficient Power mean on Roku?

Insufficient power in the Roku device indicates that your Roku stick isn’t receiving enough energy to function effectively. The reasons behind this issue are listed below.

What do you do if you experience a Low Power Issue on a Roku Device?

Roku’s power problems are most likely due to a malfunctioning USB cable. A cable that is not Roku’s official cable could not provide enough electricity to the gadget. And because of that, it may be lower in voltage, which causes this problem. If you’re using a less-than-efficient and cheap cable, switching it out with the authentic Roku cable is best for the best performance.

If you previously could use your USB ports on your television to run your Roku without any issues, However, if you’re now seeing this error, you might need to reset your TV. Check the instructions that came on the TV for how to reset it.

The majority of the time, it is as simple as unplugging the television and letting it sit for 10 minutes will work. On some TVs with a power switch, holding and pressing the “Power” button on the TV for about 40 seconds will reset the TV.

It is hoped that this resets the USB port’s hardware on the TV and allows the proper power supply through the Roku.

The Clear Cache for Roku’s Device

The cache in the Roku device is likely to trigger various issues and may cause Roku to break down or become unstable. The stock stored on your device becomes damaged and can cause many problems. Additionally, users have claimed that clearing the device’s cache helped to resolve the issue in their particular case.

You can clean the cache by pressing Home on the remote. This will launch your main display. Then wait at least two seconds, and then give keys according to the instructions.

Make use of Direct Wall Outlet.

It is sometimes better to charge the Roku device through the wall outlet using the charger instead of connecting it to the TV. Utilize the charger supplied in the box with the Roku device, as it provides the proper current to your device, so it functions properly. Connect your power adapter to the outlet on the wall, and avoid using extension cords.

We are now moving on to some more technological fixes. A cache on Roku operates the same way on a PC, keeping relevant files in a temporary state so that their loading times are faster when apps launch shortly.

Suppose you notice that the “low energy” warning is followed by frequent glitches or crashes on your gadget; attempt to clear the cache. This will allow you to remove the memory on your device to ensure it does not have to draw the same amount of power.

Cleaning your browser’s cache on Roku requires a specific button sequence. Make sure that you’re at your “Home” display. After that, press these buttons in the following line, in rapid succession in this order: “Home (5 times) Up – Rewind – Rewind Fast Forward. Forward.

The last item on your list is to get in touch with the Roku Support team (or the brand’s support for TV partners) to assist you in resolving the problem.

It will ask you to provide the Roku product model, and you will be given instructions on resolving the issue.

Based on what’s accessible on the support page, most of what you’ll be asked to do is mentioned in this article. But, it’s worthwhile to try it with certainty.

What is the reason Roku’s low Power Problems Recur?

There is a lengthy list of things we could blame for the Roku issues with power. But, I’ve given a few of the most typical issues encountered by users of the Roku device. Here is a list of the reasons behind Roku’s power problems:

When the Roku is acting strangely and crashes or is showing inadequate or no power message, If you notice an LED that blinks red, it’s a sign there’s a power problem.

It is recommended that you begin working on the Roku low-power issue by connecting your Roku direct to the wall socket using the adapter and cable from the Roku device.

If none of this helps, If that doesn’t work, try turning off the power and let the Roku get cool. If the issue reappears, clean the cache, disconnect extension cables, verify the cord’s connection or alter the USB port, you used.